This is the second cassette release from Elliott's high school band Stranger Than Fiction. It was self-released.

Credits taken from the cassette liner notes are below.

Stranger Than Fiction is listed as:

- The album was produced, engineered, and mixed by Tony Lash.
- Additional engineering by Steven Smith, Jason Hornick,a and  Eric Hedford (I think, it's a bit hard to read)
- Recorded at the Hedhouse (again, hard to read) and Woofbark Sound between November 1985 and March 1986. Mixed at Woofbark Sound

Song to the Great Serpent - lyrics by Glynnis Fawkes, music by Jason Hornick

Living in Rotational, Freedom of Expression, Nothing to Do with You - lyrics by Garrick Duckler,  music by Jason Hornick

The Vatican Rock - lyrics by Garrick Duckler,  music by Buddy Hey (I think, hard to read)

Jump Across the Mountain, Tunnel Vision, Sound to Me - lyrics and music by Steven Smith 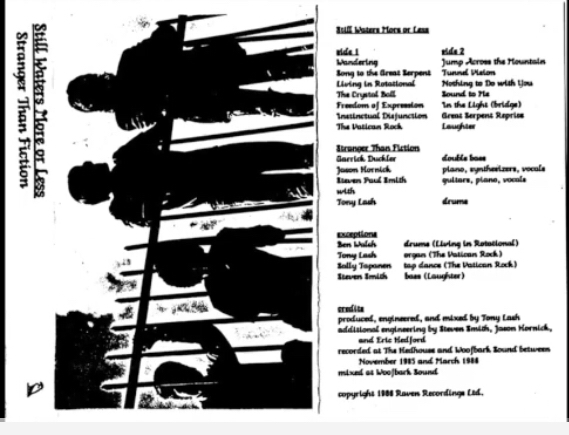