Baby Britain
Waltz #1 (Demo)
The Enemy is You

Baby Britain was released in 1999 as a single for the previous year's album XO. It was not released commercially in the US. Only this promo CD was put out by Dreamworks in the US. It comes in a slimline jewel case. The cover is unique artwork that is different than any other Baby Britain release. It states on the cover: "Spin Magazine's #2 Album of 1998". The opposite side of the front insert boasts about some of Elliott's accomplishments such as appearing at the Academy Awards, on Saturday Night Live and other info about album sales and tours. The back cover mentions that it's a promo copy and not for sale and has credits for the single. It also says "Fights Problems With Bigger Problems" toward the bottom. The songs on the CD are a remix version of Baby Britain and the album version. Matrix info according to Discogs:


Some photos taken from discogs.com 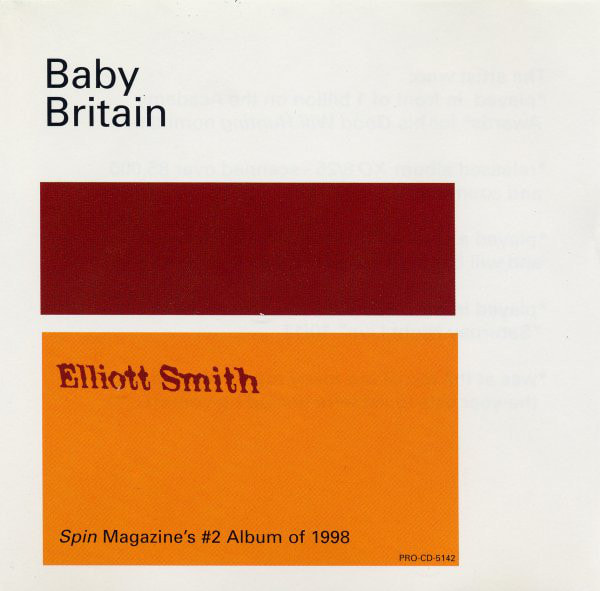 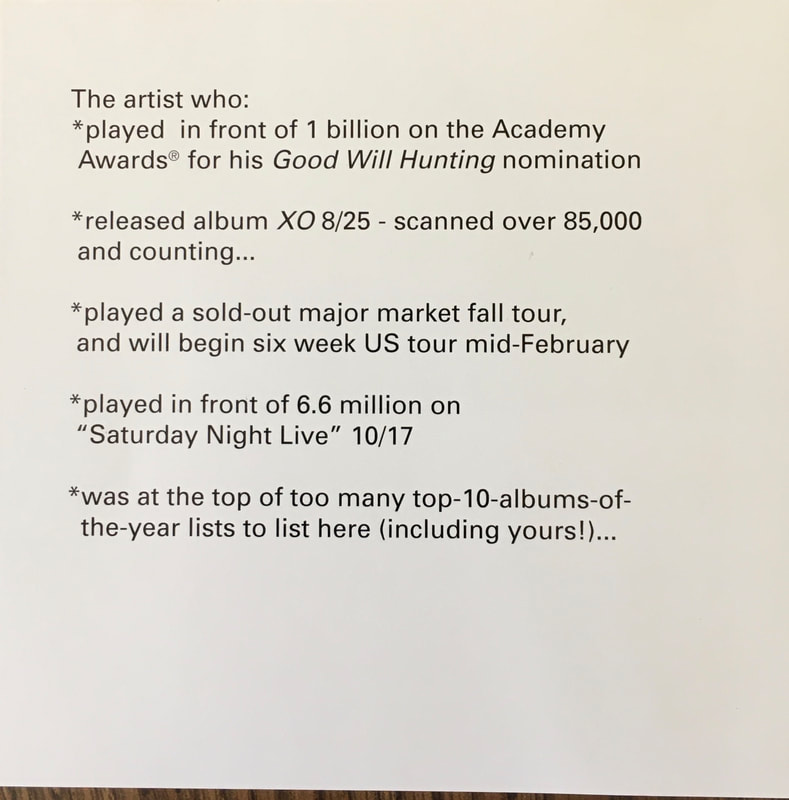 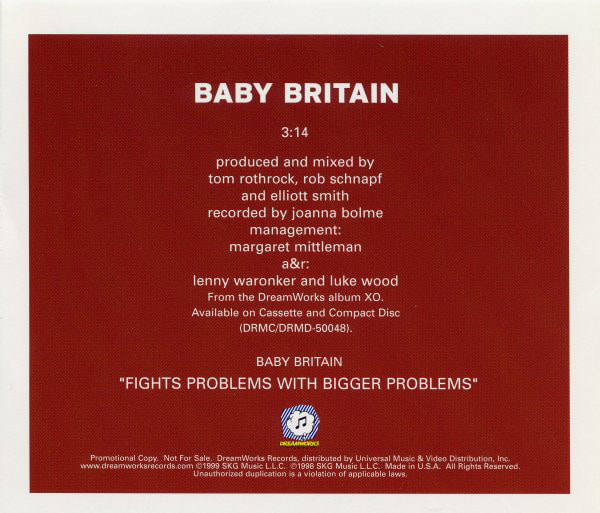 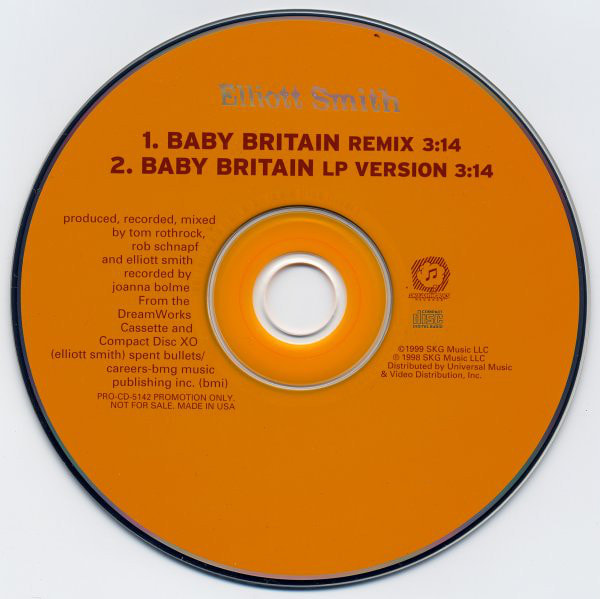 This European CD single is in a slimline jewel case . It  combines all the b-sides from the two part UK CD single other than Some Song (Alternate Version). The Discogs listing doesn't assign a country/region to it but mentions that it says it's made in the EU.  The colors used for Elliott's name and the song title match those used for the UK  7" and CD 2 (unlike UK CD 1). The CD face is black as opposed to red or green for the UK CD's. I've seen a version with a hype sticker attached to the jewel case that has Hebrew writing, presumably for promotion in Israel. Since the CD/packaging are the same as this version but just with a sticker attached to it, I'm mentioning it here rather than having it be in its own entry (see photo below). Barcode/matrix info according to Discogs: 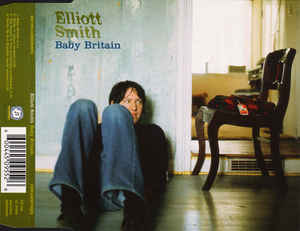 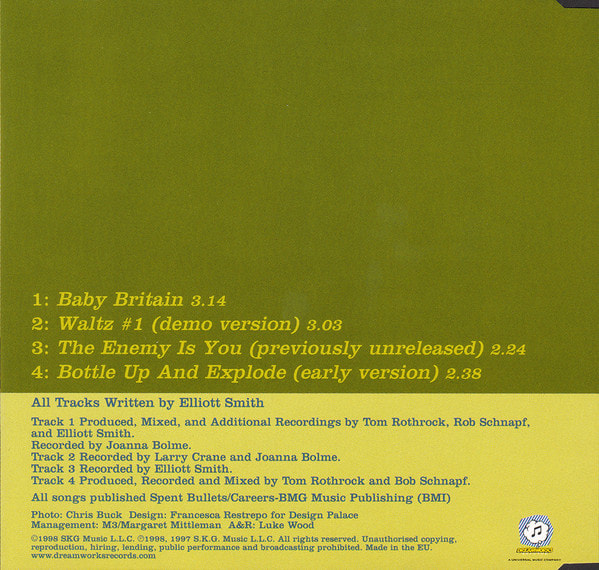 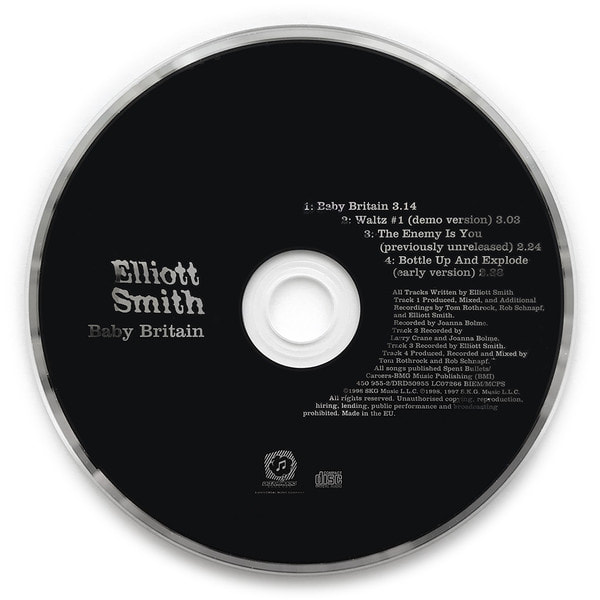 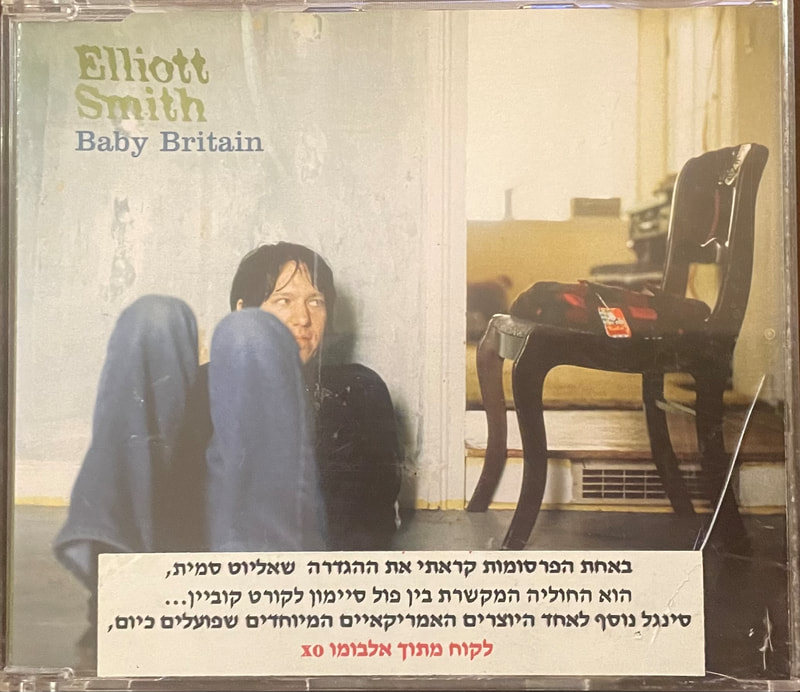 The Discogs listing for this pressing has very little information (and for some reason is on the main page for Happiness and not Baby Britain). It states that it's a CDr promo and that it came out in 1998 and not 1999. There is one photo of the CD on Discogs which is below. Any additional info on this pressing would be great. The word promotional is spelled wrong and the writing on the CD looks pretty fuzzy, not sure if this is a legit release or not? 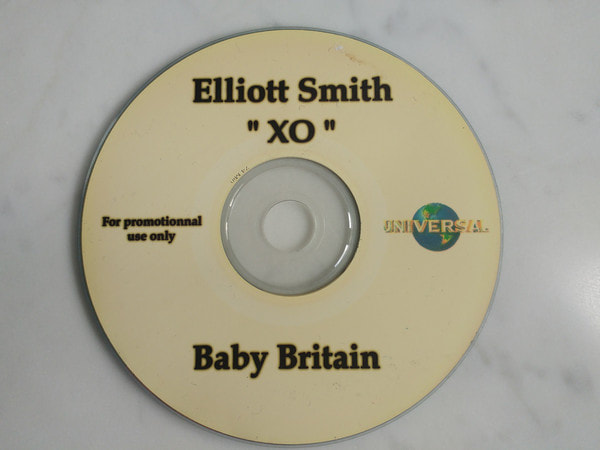 Based on the details in the Discogs entry for this one, it's a bit confusing exactly what this release is. One of the photos (see below) show some sort of insert that says promo on it. And the entry says that it comes in a protective PVC pack. The Discogs entry seems to be intertwined with the standard UK 2 CD's. So perhaps both of the CD singles were distributed with just an extra promo insert? Definitely need more info on this one. 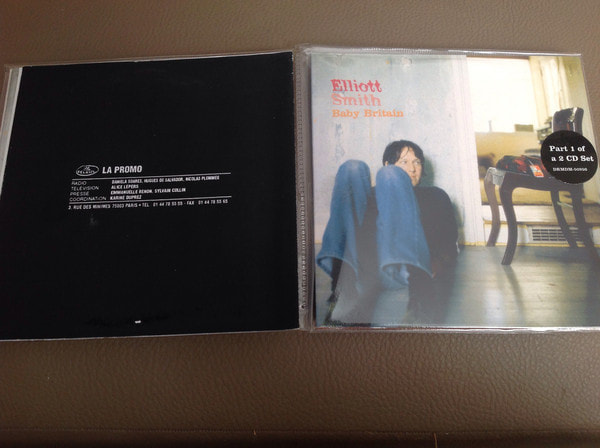 This is the only vinyl release for Baby Britain. It comes in a sleeve with the standard Baby Britain art and has just Waltz #1 (Demo) as the b-side. Photo is by Chris Buck and design is by Francesca Restrepo for Design Palace. 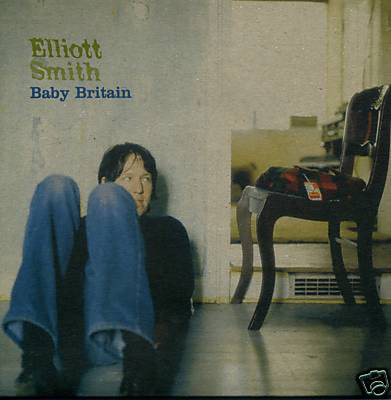 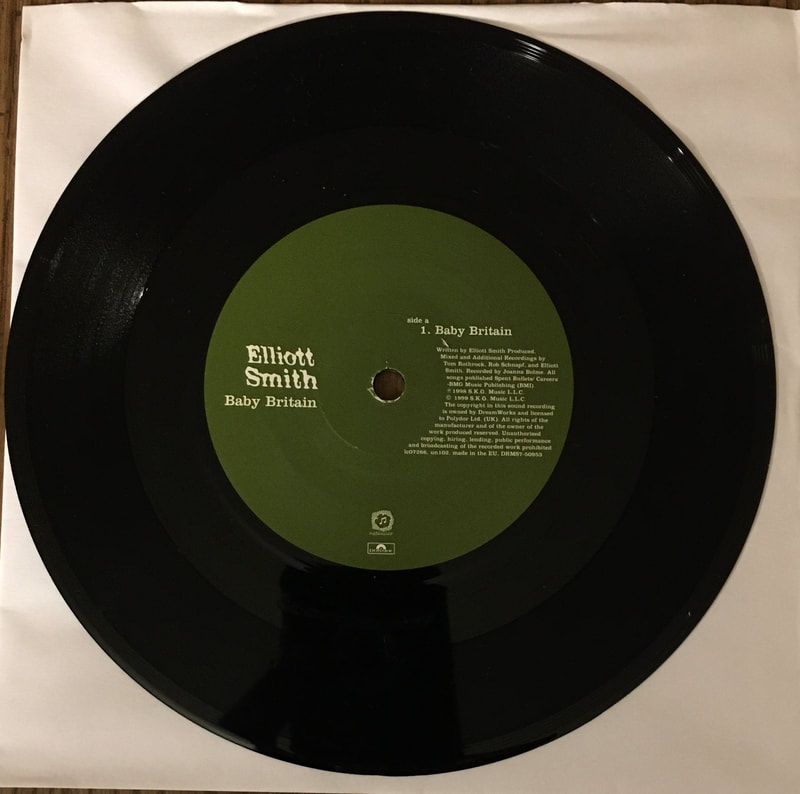 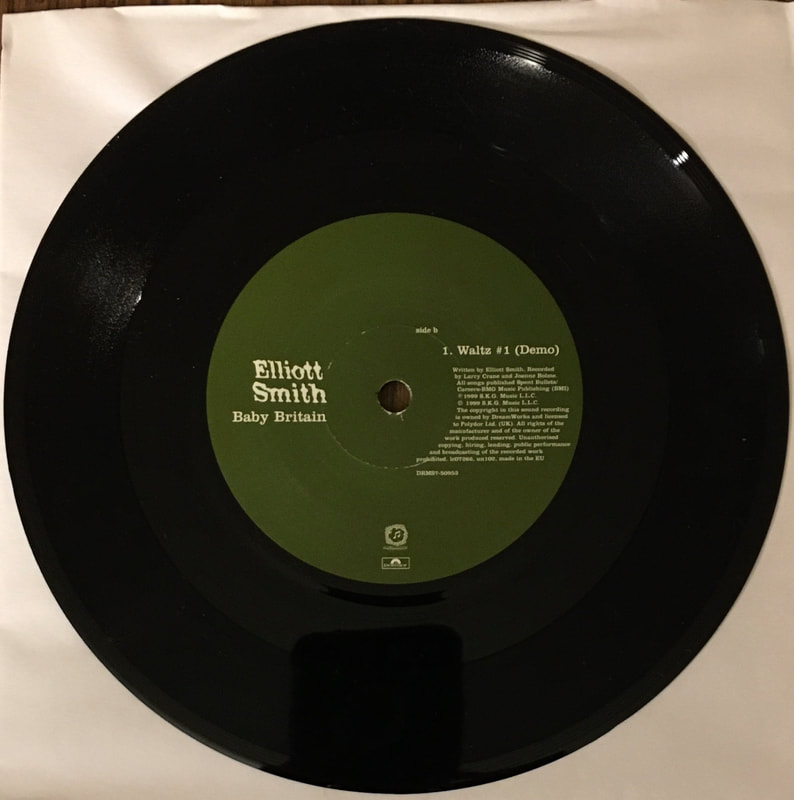 Baby Britain was released as a CD single in the UK in two parts. CD 1 has Waltz #1 (Demo) and The Enemy is You as the b-sides. The front artwork is the same as the 7". However, the colors used on the some of the text is different. Elliott's name and the song title are all different shades of orange/peach on this CD while  the 7" and CD  2 have his name in green and the song title in blue. The back is also the same except it's red instead of green. The CD itself is also red. The cardboard sleeve comes in a two pocket plastic gatefold package. Inside the second pocket is a cardboard insert with a black and white version of the cover art and that states that CD 2 is also available. Presumably, people would buy CD 2 and then put it in this second pocket. There is a listing on Discogs that groups the two CD's together this way. The front of the plastic gatefold sleeve also has a sticker that says "Part 1 of a 2 CD set". Barcode/matrix info according to Discogs: 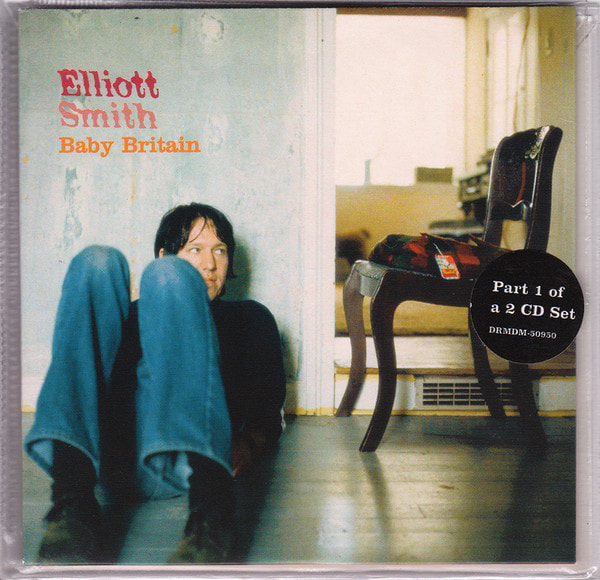 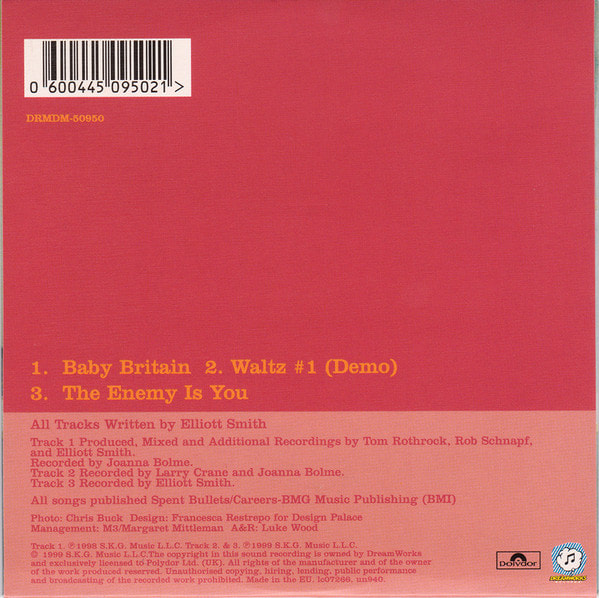 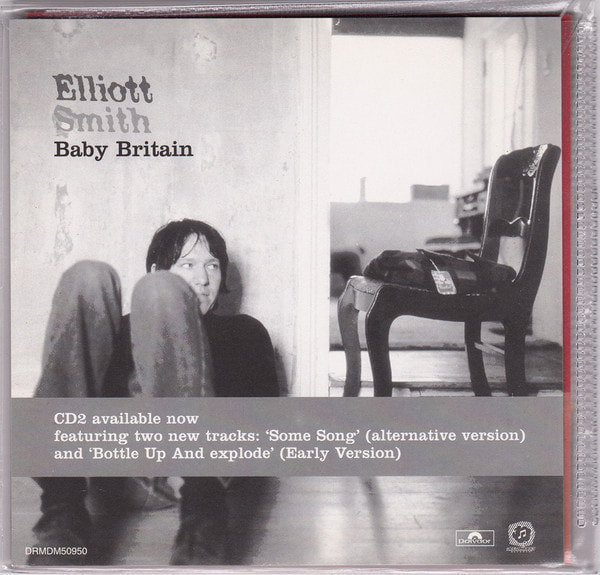 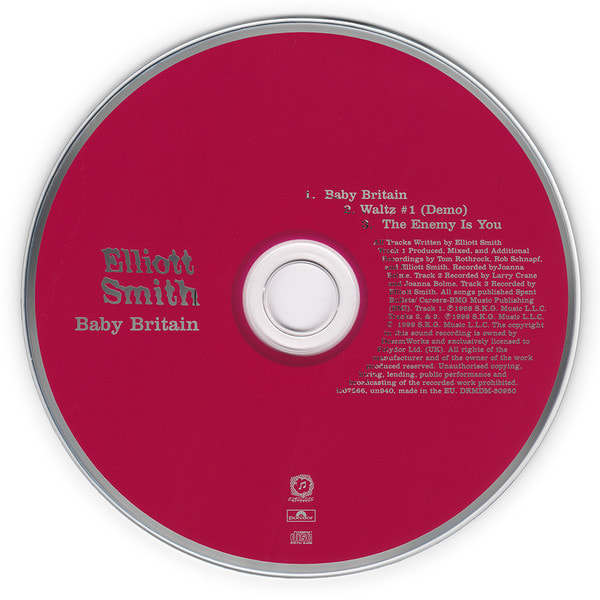 Baby Britain was released as a CD single in the UK in two parts. CD 2 has Some Song (Alternate Version) and Bottle Up & Explode! (Early Version) as the b-sides. It comes in a cardboard sleeve like part 1 does. The colors used for the text on the cover match the 7" artwork (unlike CD 1). It doesn't come with the plastic gatefold packaging though. Presumably, people would take this one and put it in the second slot of the plastic sleeve that came with CD 1. The cover has a sticker on front that says "Part 2 of a 2 CD Set". The back cover and CD itself are green for Part 2. Barcode/matrix info according to Discogs: 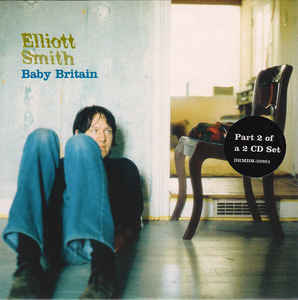 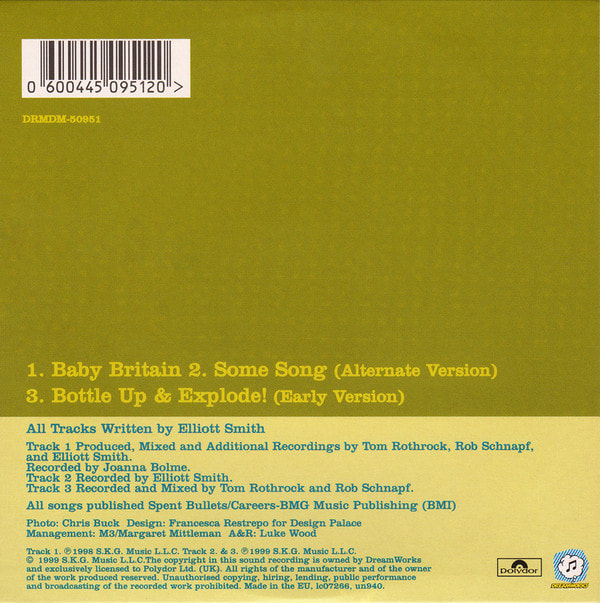 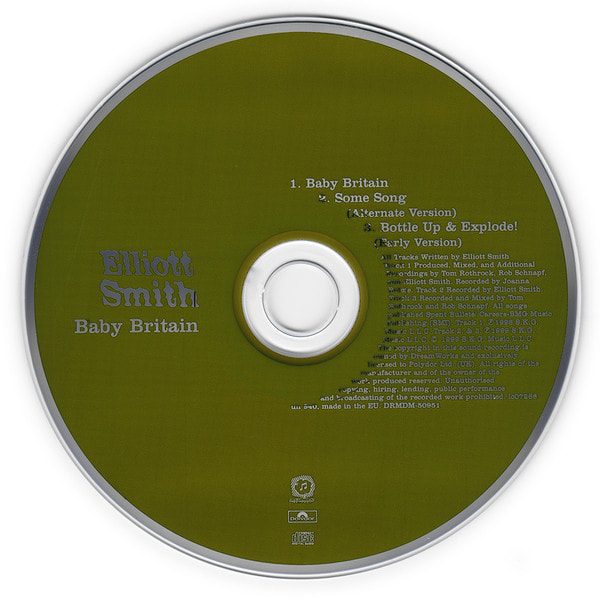